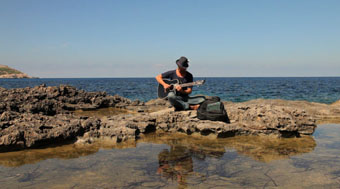 In the Hollywood of electronic music, musicians, DJs, gogos and promoters are working on a sophisticated entertainment machine to satisfy stressed-out Western society’s desire for fun, sex and freedom.

Each of the “nine and a half music stories” presents part of the whole, whether of the island or of our world. It doesn’t claims to be able to tell all, but is rather a voyage with stops, almost a collection of short tales. The island is the protagonist, music however its inspiration, because in Ibiza, music is the cardinal point where all lines meet.