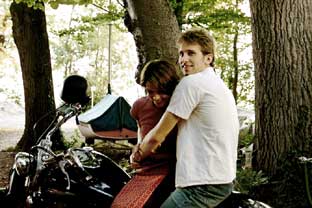 Fanny, a young woman full of joie de vivre, never tells anyone about the fits of panic that sometimes seize her, not ever her best friend, Rike. On Rike’s birthday, Fanny and Moritz, friends from university, go by train to her home town. Moritz is unaware that Fanny is merely taking him along to avoid having to take the train on her own.

Fanny and Rike are overjoyed to meet again. It’s more or less like in former times. But Rike and Moritz vie for Fanny’s attention. Fanny hides behind a façade. All of a sudden, in the middle of the maze, the situation escalates. A battle for life and mutual understanding begins between the two women.