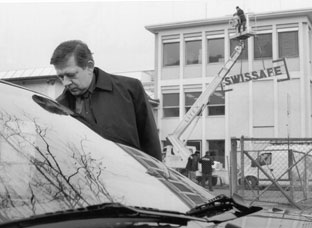 Erwin Graf, a 50-year-old family father, has lost his job as deputy manager of personnel with a well-known Swiss company. From shame he keeps his dismissal from his family. Every morning, he dresses up, leaves home and spends the day in a motel. His reserve hurts his wife, Kathrin, who anxiously pins her hopes on their future home, a house they’re just building.

Their daughter, Lisa, too, is battling to gain self-confidence, having to decide which career she wants to train for. One day, Kathrin discovers that Lisa habitually injures her forearms with sharp objects, only to be told by her daughter that Erwin has been deceiving her about his situation at work for weeks. When eventually the bank cancels the mortgage, the fragile family fabric falls apart.