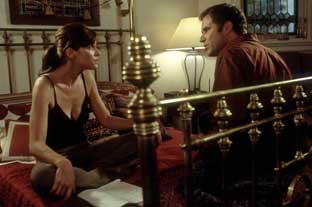 Four sophisticated New Yorkers enjoy a dinner out on a rainy night. An anecdote provokes a discussion between writers Max and Sy about the dual nature of human drama, symbolized by the comedy/tragedy mask of theater. Ultimately a comic tale unfolds, pitted against a more dramatic version of itself—both centered around a somewhat enigmatic woman named Melinda and the fragility of love, marital infidelity, sophisticated romance, the inability to communicate. As a character in the movie puts it, “He’s despondent, he’s desperate, he’s suicidal. All the comic elements are in place.”