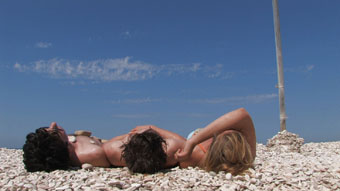 It’s summer. Three friends are on the road. They have their lives ahead of them. Falling in love, desires, fighting and despair. Having to bear with themselves. Having to deal with their own hopes and desires and those of the others. Dreams? But for what? About what? Italy. The sea.

Leon, Joaquin and Johanna. Three lost souls. But the world is their oyster.