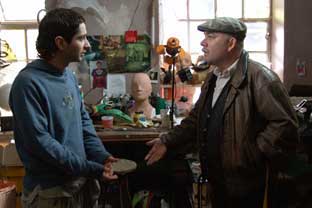 Ibrahim, 21, a.k.a. Ibo, is intent on making the very first German Kung Fu film. For practice’s sake, he directs a commercial for his uncle Ahmet’s doner kebab shop and audiences throng to see the spot and then crowd the kebab shop. Ibo envisages a bright future unrolling before him. Then Titzi, his attractive girl friend, jumps the information on him that she’s pregnant. Since Ibo’s delight is less than exuberant, she gives him the boot.

On top, Ibo is chucked out from home. His father, Mehmet, just about accepted Titzi as his son’s girl-friend – but definitely not as his grandchildren’s mother. Ibo’s attempts at flogging his script turn to nothing either. At least uncle Ahmet promises to promote a reconciliation with his father on condition that Ibo makes another commercial for him. However, the spot doesn’t induce diners to storm his shop, and Ahmet in his turn has a hard time trying to appease his pig-headed brother …