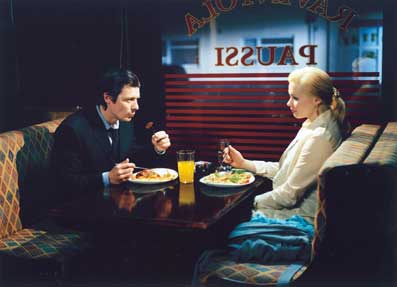 Koistinen is a security guard whose only friends now are alcohol and tobacco. On his nightly rounds, he comes to modern restaurants and flashy shopping malls. One day, he meets blonde Mirja, and for a time, fate seems to smile on him. But then the gang of criminals that Mirja belongs to, exploit his gullibility, and as the main suspect of a theft of jewelry he’s sentenced to two years’ prison. Stoically, he accepts his fate. On his release, he tries to start over. After all, there’s the sausage vendor, Aila, who’s long been admiring the lonely security guard …