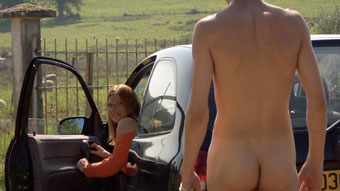 Kevin is a peculiar young man whose behaviour at times verges on the dangerous. He shares an isolated farmhouse with Jean-Claude in the middle of beautiful natural surroundings. The two men live in a disconcerting silence. When Michèle meets Jean-Claude, she considers him a casual lover. But the moment Kevin appears, she believes the time has come for her to give a meaning to her life …

EDUARTTHE CALL OF THE GECKOS