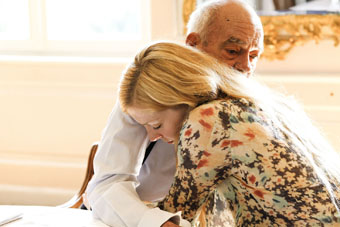 Patriarch and entrepreneur August Manzl is terminally ill. As his four grown-up children are all spoiled and sluggish, he comes up with a rather cynical idea to determine the future leader of the family empire: whoever of his children shows the courage and willpower to end his suffering within the next week will become the sole heir – and simultaneously prove to have the skills necessary to succeed in a modern business world.

A murderous competition evolves between the children. In the middle of it all, Elisabeth shows up, the youngest daughter whom the patriarch has intentionally left out of the barbarous plan. During her studies, Elisabeth sought therapy and is determined to bring her screwed-up family back together. August himself contributes mayhem to his final week by showing his children just how incapable they all are. For him, it is great fun – but at some point it all becomes too much: at the end of the week he is in a coma. The whole family gathers at the hospital, but not in the way Elisabeth had hoped. In the end, she is the one, her father’s favorite daughter, who sends him off into the afterlife – and now has to take on the family inheritance.