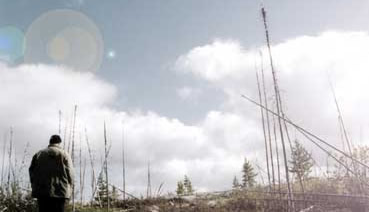 Christian kills his mother who is incurably ill. In his confusion he decides to go on a trip. He has to escape the law but also the moral pressure of what he did. In a hired car he drives as far north as possible, finally ending up “where the tarmac road stops”, in the small village of Radisson in James-Baie. He bums around, gets to know the locals, takes part in their actitivities, finds a job and slowly starts enjoying life again. Then fiction turns into a documentary.