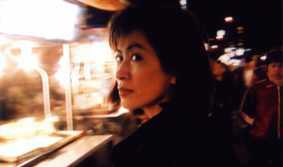 On behalf of a lawyers‘ office, Sternfeld has gone to Taipeh to hunt down pirated CDs and document their sale on video. Not being able to meet up with his local contact, Sternfeld is lost in the foreign city. Taking up with a prostitute doesn’t lessen his feeling of strangeness. Only when he meets Tschang does his perception slowly begin to change. The woman touches him, but he exploits her for his job. Consequences arise …