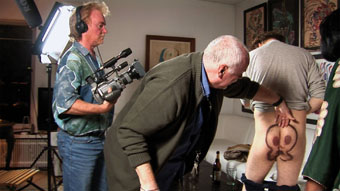 The life, work and passion of Lothar Lambert – enfant terrible of the Berlin underground scene; independent filmmaker, voice of the homosexuals, bisexuals, transvestites and transsexuals; taboo breaker when it comes to the presentation of sexual drive; observer and critic of social marginality in the fight to survive in the city jungle and in dealing with loneliness, desires and fear of loss; off-stream fetishist and hobby psychologist; a merciless advocate of a somewhat “uncomfortable” film style.

In the years between 2008 and 2011, a small film team visited Lothar Lambert, his infamous “Lambert Family”, as well as friends, enemies and critics of the gay director who for the last 40 years unflinchingly and almost entirely without any financial means has made 36 films which are considered by film experts to be experimental, art, trash and underground. The 68-year-old arouses and alienates the scene, he’s understood and celebrated, then again ripped to pieces and laughed at.

Through interviews, film clips, visits on the set and at home this documentary approaches the life and work of this tireless man and attempts to find out the “naked truth” behind the rage of this largely misunderstood artist.