WHERE’S THE BEER AND WHEN DO WE GET PAID 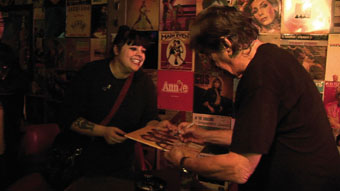 How does it come about that Jimmy Carl Black, the legendary drummer of Frank Zappa’s “Mothers of Invention” ends up in a small Bavarian village? “The Indian of the Group” can barely speak German and is greeted with a typical Bavarian ‘Servus Mr. Black.’ From the Höpfling train station, the 70-year-old drummer and singer tours through Europe and for the last 40 years has had to sign the same old Zappa albums, one after the other. “To tell you the truth, I don’t like to play the drums that much anymore. It’s too hard a work, man. But I need the money.” During the last two years of his life, the filmmakers accompanied Jimmy Carl Black, who concealed his cancer with blustering humor. Their camera followed him in Höpfling and at his performances. No one wanted to believe that his last big American tour, which also lead him to his hometown of El Paso, would be his last.

SCHULTER AN SCHULTERSTATUS OF LIFE