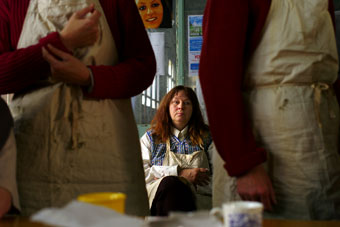 A factory somewhere in French Picardie. A few months after a down­sizing, the female workers are on the alert. The director calls in them for a little surprise, brand new scrubs,in this case, with their forxenames embroidered on them. A gift that puts every­one at ease. Hope is back. Before they go home, about ten workers celebrate the event at the corner café. But the next morning, there is conster­nation: machines, offices, every­thing is gone. The management is on the loose, apparently the accomplice of a swift outsourcing. Total disenchantment prevails.