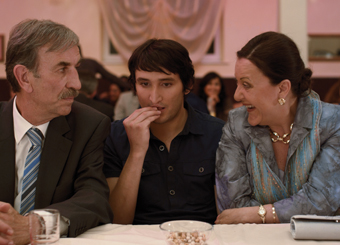 A Turkish family in Germany wins the lottery jackpot. While the parents immediately want to buy a hotel in Cappadocia to fulfill their dreams of returning home to Turkey, the two grown-up sons have completely different plans, or rather, none at all. Particularly the youngest son, Luk: he has no clue what to do with his part of the fortune.

His parents assume that he will contribute to the hotel in Cappadocia. But Luk, who has never really done anything serious in his life, starts to reflect about himself, his life, and his future. The multitude of possibilities created by this sudden wealth sends him into a depression. Looking for a way out of his misery, he starts hanging out with his ex-girlfriend Gül, who sings in a popular band with Musti, one of Luk’s former school friends and a competitor for Gül’s affections.

When Luk realizes though that his money alone is not going to bring Gül back, he comes up with the idea of recording a song and making a video – in Cappadocia – with himself and Gül in the leading roles. But his dream of success and happiness with Gül bursts like a soap bubble and he is thrown back into sober reality. However, these negative experiences finally give Luk the opportunity to take things into his own hands and find his happiness in a place he least expected.