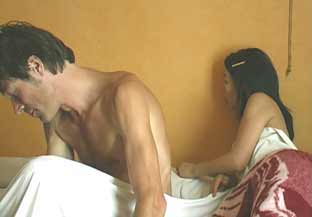 Hee-Jin, a Corean, lives in Berlin with her mother. She’s pregnant by Ralf, her depressed lover she’s no longer in love with. At her brother’s centre for martial arts she meets Laurent, a Frenchman working in fashion. They have an affair, but he soon disappears to Paris. Her friend, Judith, wants Hee-Jin to have an abortion because now she is Ralf’s woman. Following a row with him, Hee-Jin has a miscarriage. But her strictly catholic-minded mother, believing she had an abortion, throws her out.

Left to herself, Hee-Jin goes to Paris in search of Laurent. There she encounters Serge, an old painter who offers her shelter. By chance she also finds Laurent, working as a waiter in a restaurant. He tells her he has returned to his wealthy wife. When Hee-Jin has to leave Serge’s, she roams through France, destitute, until one night the tent she nicked from Serge burns down. Defeated, Hee-Jin returns to Berlin to rebuild her life among the ruins.