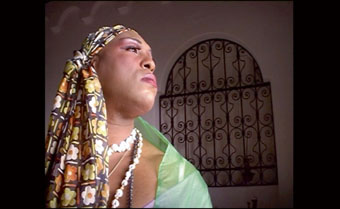 The film is set in Los Angeles in the artists’ villa “Aurora”. This is where the German writer Lion Feuchtwanger and his wife Marta fled to from the Nazis. He was one of the very few German exiles whose books were a success in America. After his death, Marta and her secretary Hilda resided in the villa in grand style. I asked the actor Vaginal Davis, a well-known black transvestite, and Selene, a Mexican of short stature, to capture an impression of the two women’s sadomasochistic relationship. I think we managed to do the impossible.