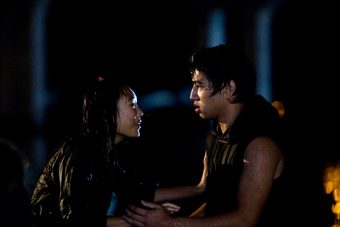 “Matariki” is the Maori name for the small cluster of stars also known as the Pleiades or the Seven Sisters, in the Taurus constellation. In New Zealand it comes into view low on the north-eastern horizon, appearing in the tail of the Milky Way in the last days of May or in early June, just before dawn. This heralds the Maori New Year.

It’s the eve of Matariki – a time for new beginnings. As the Pleiades constellation rises in the Southern skies, the lives of eight people are affected by one random act. Aleki, a master car thief who dreams of navigating by the stars, crosses paths with rebellious teenage girl Spit and faces his future. Rugby league star Tama saves the life of desperate Gunge – an act of heroism that brings tragedy to his own family. Rick, Tama’s brother, learns to stand up for himself and Megan, Tama’s wife, comes to accept the love that surrounds her; while Lisa, pregnant and wishing on angels, finds a real angel in Tyrone, a big-hearted man who sells Matariki icons in the weekend markets.