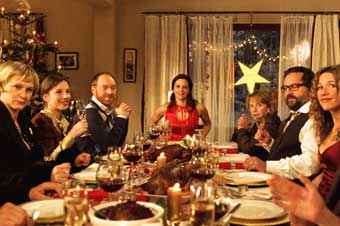 Sara is happy. She loves Jan, her fourth husband, and her patchwork family which consists of three children from three different relationships plus Jan’s son by his former wife. For Christmas, she’s now invited all the exes including their new partners. Jan’s not at all delighted, but before he can step in to prevent the catastrophe from taking its course, they’re all knocking on the door. An evening with bickering and spiteful remarks begins, with discussions between men in the sauna and jealousies. Secrecies are revealed, misunderstandings are cultivated, and to crown the evening, Sara announces her Christmas present to Jan: she’s pregnant. Too bad Jan can’t possibly be the father, and too bad Sara isn’t aware of that fact …