MOUNTAINS OF THE MOON 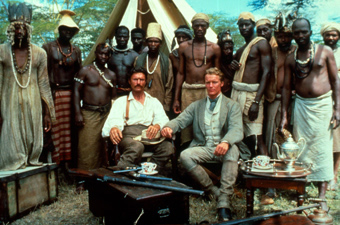 It’s 1854. The British lieutenant John Speke has just arrived at the African coast in Somaliland, looking for his fortune. He immediately goes in search of Richard Burton, who has mounted a party and will soon depart for the African interior with the ambitious goal of discovering the source of the river Nile. Speke joins the seasoned explorer who appreciates him due to his many weapons, but because of his naivety, his European arrogance and his carelessness in scientific matters also a burden.

The two men survive the expedition through uncharted territories with all the concomitant threats of native attack, disease, famine, pestilence or simply getting lost at times only thanks to the other man’s interventions. But the trek also pushes their relationship to the limit, they return to England individually. A publisher’s scheme brings them back together again; he plans to have their expedition to the Nile’s source funded by the Royal Geographical Society, then edit Speke’s memoirs and issue them on his own press.

Burton and Speke set out for Africa again, and again they trek through unexplored territories. Eventually, they are captured by an Angolan tribe. Speke is allowed to continue on the expedition if he leaves the sick Burton behind as a pawn and discovers what he is convinced is the source of Nile. Burton, however, is adamant that the evidence is neither sufficient nor scientifically accurate.

Again, the two men return home separately. At the instigation of his publisher who tells Spekes lies about Burton, the former claims sole credit for the discovery …