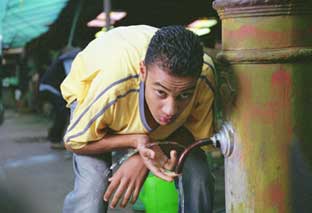 The film follows Rashid’s first and last day at work. The Roman market on Piazza Epiro with its vendors and buyers, tourists and gypsies, nuns and flying salesmen is the vivid background for the drama that unfolds. The plot and its images go round and round like a merry-go-round and set the motifs of life and death into a cyclical motion that comes full circle with Rashid’s sudden death.