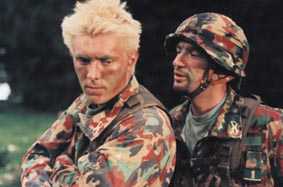 In present-day Switzerland, an army lieutenant takes six of his men on a reconnaissance mission just a few days before the end of their annual tour of duty. Due to a blunder, the party gets lost and the Swiss soldiers find themselves on French territory. The lieutenant is faced with a real dilemma. To return to Switzerland via the nearest customs point means accepting the consequences of having violated Swiss laws and being automatically categorised as a deserter for having crossed the national boundary with an assault rifle. But to cross back illegally through the forest on foreign soil is also a course fraught with danger.