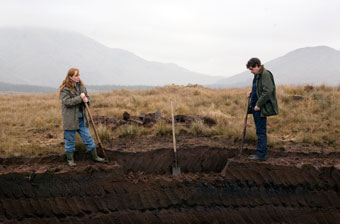 A young, non-conformist woman is wandering through Ireland. She left her home in Holland behind her and is now roaming around with her backpack, through wind and weather, in the remote areas of Connemara. She has decided to take on the life of a vagabond; looking for solitude, she has found it here in Western Ireland.

He is a man in his best years and lives a reclusive life in an isolated house on a beautiful island. She is radical and uncompromising. He is wise and ironic. What binds them together is solitude, something they both consider to be their freedom. He offers to let her work for him for food and lodging. She accepts under one condition: that no further contact is to be established between the two, no personal talk, just work. But over time, they two loners develop a certain sense of curiosity in the other and they both want the same thing: to keep their arrangement, but also to break it. Their simple life follows a cycle of days and nights, work and leisure, and slowly brings them together. Who will be the first to break the pact?