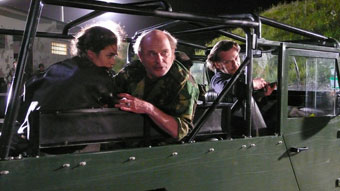 Santa Maria station – at night. Ossorio, a man in his forties, gets off a train and is caught up in a crowd of pushing refugees and exhausted soldiers. In a besieged town, the hero of a failed resistance movement tries to find his old allies and his old love. But not only has the situation changed, so too have his old friends. While an uncontrolled militia terrorizes the city, everyone tries to save his own skin.