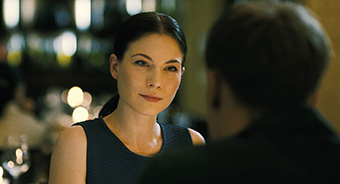 In a small village in the Austrian Alps there is a hotel, now closed. Many years ago, when people still took summer vacations in such places, it was a thriving business. Two sisters grew up here. Sonja now lives in Berlin. She became an actress, very successful, a TV star. She made a career for herself within very short time: she is still in her early 30s. She has achieved a lot – but something seems to be missing from her life. She keeps a distance from people, as if trying to protect herself. She goes through phases of sadness. Without her work and her professional attitude, she always seems a little lost. Homeless even.

Her sister, Verena, who is a little older, never left the village. After their mother’s death in an accident, she and her husband and son moved into her family home, though the place is far too big. But Verena’s needs are not as modest as they seem. A secret affair with the local doctor brings out a passionate discontent in her, a longing for a different life. The sisters’ father also lives in the old house. Still a patriarch, he has grown old and surly. His wife is dead, the hotel out of business. It’s autumn, a beautiful October, and the leaves on the trees behind the house are richly colored. Then a major heart attack brings him close to death. He survives, but from now on he is a sick man. For Sonja it is high time to visit her family and the scenes of her childhood. A new chapter begins; old relationships are reconfigured.