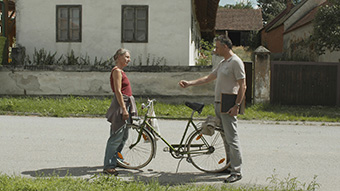 A man sleeps in a car. A woman brings him coffee. The film begins abruptly and takes its time in recounting the story how these two people relate to one another, why the man was stranded with his Mercedes on the meadow all in blossom and why he doesn’t seem to notice the laughter of summer.