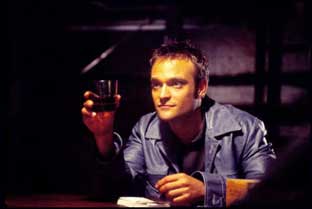 Rookie detective Jason Bartok and his corrupt partner, Leon, are called to a crime scene. As Jason, at the older policeman’s urging, grabs stolen money, he accidentally shoots Leon. Guilt-ridden, the young man takes to the road to track down Leon’s lover, Linda/Shen Li, an illegal Chinese immigrant, to deliver the bag of cash to her.

Jason’s search takes in seedy motels and rough bars, an L.A. massage parlour and a Nevada ranch, until finally, in a dingy Vegas dive, he discovers the strikingly beautiful, enigmatic Linda, ensnared by the sex trade. Stalked by thugs, the money’s “rightful owners”, Jason and Linda are thrust together to make their escape through the haunting landscape that is the California desert.

As Linda’s “American Dream” continues to crumble and Jason struggles with numbing guilt, the two become passionate lovers desperate for a fresh start. The hit men close in as Jason and Linda plot their escape to Paris …