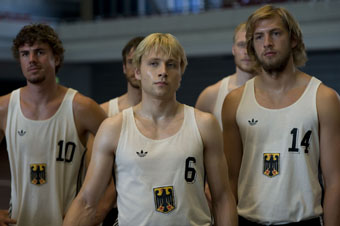 The film tells the story of legendary Israeli basketball coach Max Stoller who became a national hero when he won the European Championship with Maccabi Tel Aviv in the late 1970S. But Max became a national traitor equally as fast when he accepted, against all odds, the job of turning the totally hopeless West German national team into Olympic contenders. This despite the public outrage in Israel, and despite his mother regarding his actions as an act of betrayal. Max always maintains that Germany – where he was born before the war and where his father was taken away by the Gestapo – means nothing to him, and that training their national team is just another job on his path to NBA glory. But things aren’t quite as simple as Max wishes them to be …