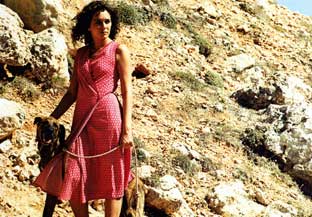 Her name is Grazia, and she’s like the sea: unfathomable, with heights and depths, gentle, a warm current of tenderness, then again aggressive and wild. In any case far too unpredictable for the people of Lampedusa, a Sicilian island where people eke out a meagre living. The men go fishing, the women work in the fish-packing factory. Up on the cliffs the young lads stake their territories or go hunting birds, and in the evenings they dress up to the nines and go sauntering down Via Roma for the ancient ritual of ragazzi and ragazze. Everything would be fine …

… if it wasn’t for Grazia, mother of an adolescent girl and two rebellious boys. For the villagers, the young woman’s carefree sensuality and her changing moods are a constant thorn in the flesh. Most of them regard Grazia as mad. They put Pietro, her husband, under pressure until he finally agrees to send his wife for treatment to Milan. But Grazia runs away. And Pasquale, her 13-year-old son, will single-handedly find a way to protect his beloved mother …