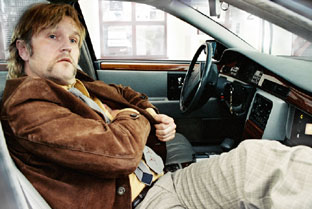 On the run, the stoical money courier, Johnny, escapes from Austria to Slovakia with Shirley. Yet before he gets the chance to make even a fleeting acquaintance, the enigmatic blonde vanishes. Setting off in search of her, Johnny instead encounters her twin sister, Jana. Then there’s the hapless East German Ignaz who keeps turning up in Johnny’s life as he stumbles from one bizarre predicament to the next.

It’s her future that makes Shirley frequent hotel rooms and run away from love. It’s her past that holds Jana, a taxi driver in the Ukranian city of Lviv, hostage and makes her mind sheep and a host of secrets. It’s money that makes the small-time crook Ignaz flounder helplessly in the bewildering post-communist world and form friendships which invariably prove his downfall. On the run from the snares of intimacy, they all embark on an odyssey of emotions which, incompatible with the rules of the game as it is played in Eastern Europe, continues until the Blue Moon rises over distant Odessa.