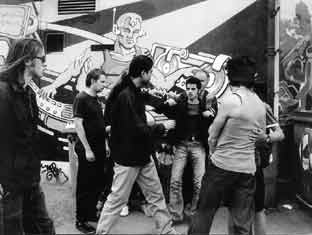 Like most youngsters his age, 20-year old Rocco is mainly concerned with his looks and his body. Whenever his father can spare his help, he’s out and about with his friends – anything rather than sitting around the tiny 1-bedroom flat he shares with his sister and his parents who emigrated from ex-Jugoslavia.

Eventually he gets to know a failed, but good-natured artist, Max, and pretty, experienced Leila, a teacher, who together are planning to open up a bar. In Rocco’s eyes, the couple embody the sane world. Leila, bored in her relationship, starts an affair with the naive young man for whom an exciting phase with promises new experiences. Working in the bar, he attracts the attention of a local gang …