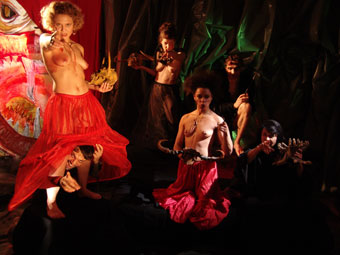 Rosa von Praunheim made a feature documentary about the history of hell. It is his personal search for the genesis of the soul, for the determination of religions and the concept of retribution in the afterlife. Rosa von Praunheim was raised Catholic and served as an acolyte. He experienced how draconic priests of the 1950s threatened a sinner with a cruel hell. Now, as an older man, he wants to find this place again. He consults theologians, cultural scientists, fundamentalists and critics of religion. And he finds brutal perceptions of the afterlife in other religions – in Islam and Hinduism. Even the Buddhists have eight different cold and fiery hells.

Strict Evangelists describe this place as horrific. The modern human notion of hell has already made its way to earth through World Wars and the Holocaust. But on the other hand, images of hell have become a part of pop culture, in the music scene, with Black Metal as a sharp critic of Christian ideals. Modern thought has not displaced religion, on the contrary. The desire to become immortal, the difficulty in coming to terms with death and the quest for a balancing sense of justice appear to be exactly that which distinguishes man from animal.