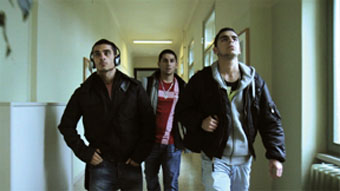 When 25-year-old rapper Ardalan A., a.k.a. Nazar, is released from investigative custody, he not only has financial difficulties. The “Austrian with a migrant background” is accused of robbery. His friends Vahid and Musti are on his side, but they too have similar problems.

With neither education nor job, Ardalan does the only thing he really knows and becomes a rapper. Off his own bat, he goes to Berlin to record his second hip hop album. Although the “blackhead” – as he and his friends call themselves – wants to find closure with his life on the streets, this kind of existence seems too closely intertwined with his own present life and his fans.

A parallel society, caught up in a vicious circle from which there’s seldom an escape …