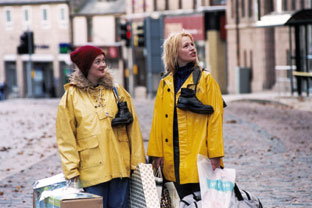 In their late twenties and tired of partying their way around the world, Danish Marie and Irish Sophie come ashore in Northern Scotland. After another drunken night they are soon parted from their accumulated cash. Out of money and out of luck, ambitious Sophie pressures Marie into accepting a lucrative job as surrogate mother. Months on, Marie finds herself alone, life having taken a dramatic turn. Heavily pregnant, and wanting to terminate her pregnancy, she’s on the run from the future parents, searching for Sophie’s old flame, Ken. In a case of mistaken identity, Marie ends up in hiding with three strange men in a seedy Glasgow garage. But then happiness strikes.