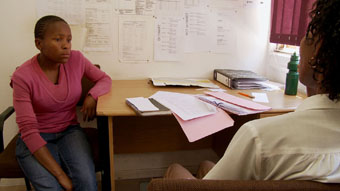 In an average month in South Africa, is it estimated that 4,500 HIV-infected babies are born and 30,000 adults are infected with the virus. In the same time frame, approximately 22,500 people die of AIDS in the country. The number of estimated rapes is around 40,000 cases – per month.

Against this background, the film strives to find answers to dealing with the ubiquity of HIV / AIDS in South African townships. How are normality and a daily routine possible in such extreme situations in life? And: how much do they count in a country which is permanently on the thin line between denial and hope?

The film follows the everyday lives of four women in South Africa and neighbouring Lesotho – they all share the same desire to save lives through improved HIV / AIDS education and to finally break with prevalent taboos and to free their own countries from this devastating pandemic. Routine, humor, an overwhelming zest for life, solidarity within the family, love – the protagonists lead their normal lives, yet at the same time the viewer senses that nothing here is “normal” an the prospects remain uncertain …