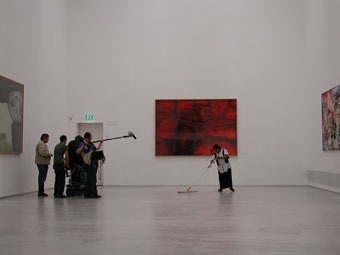 Dust. It’s everywhere, it’s ubiquitous. A conglomerate of minute particles that get going as soon as things settle down. Dust is an enemy that’s removed and returns even while disappearing. Trying to fight it is a Sisyphean task. Dust invades carpets, roof timbering and laboratories, it covers works of art. It’s released into the sky by smoke stacks and lives in every single drop of rain. Dust makes you sick, dust makes up the cosmos. It’s the smallest visible object a film can deal with.

The film goes the way of all dust. Via associations and in sinfonic movements, it follows dust to places where it lives and visits people who deal with it. Cleaners in their daily battle for cleanliness, inventors of air filter systems, scientists studying the detrimental effects of particulate matter and uranium-bearing ammunition from US arms depots, botanists, meteorologists, astronomers and artists.