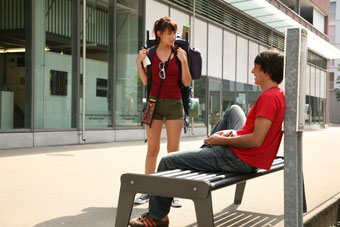 In his first life, Dave has achieved quite a lot. During the day, he runs his own record shop, during the night he works as a DJ. Under the flashing lights of the Zurich clubs, he is something of a high priest of his generation. A generation for whom it seems the parties are endless and the possibilities unlimited. … But soon Dave will be turning thirty, and he notices that a second life is beginning. While his best friend Matthias continues living a delusive life of eternal freedom, his girlfriend Sarah pressures him to move in together. Then Dave meets Alice. Alice is just over twenty, she’s from Paris, and just travelling through. In this blinding and sun-flooded summer, she is the adventure: an adventure where Dave is not certain whether he is already too old for it, or just still young enough …