THE PRINCESS OF NEBRASKA 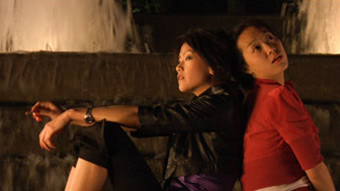 Sasha, a young Chinese woman, is four months pregnant. Interrupting her first year of college in Omaha, Nebraska, she travels to San Francisco to abort the child and confront her lover’s male friend.

Sasha is pregnant as the result of a one-night stand with Yang, a “nan dan,” or male actor who plays female roles in the Beijing Opera. Yang also had a liaison with Boshen, a white American who was deported back to the United States by the Chinese government, presumably for helping a Western journalist on a story about AIDS. As a result of this scandal, Yang has been thrown out of the opera troupe and onto the streets of Beijing, where Boshen has heard he now makes a living by hustling.

When Sasha eventually meets Boshen in downtown San Francisco, he is concerned about the fate of the child. Although she has come to San Francisco to get an abortion, she now starts to consider the myriad of options available to her in America. Boshen has motives of his own and wants to convince Sasha to keep the baby and start a three-member family in the hope of baiting Yang to America.