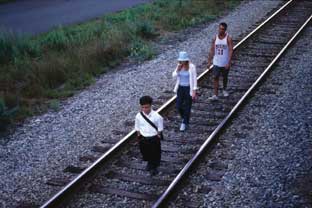 Finbar McBride wants to be left alone. But at four foot five, fading into the crowd is an almost impossible task. Born with dwarfism, Fin has responded to the unsolicited attention that his condition attracts by choosing a life of separation, alone with his one passion: trains. Solitude, however, is fleeting and when Fin finds his isolation threatened, he retreats deeper into his self-contained world by taking up residence in an abandoned train depot in rural New Jersey.

But much like the station agents that occupied small-town depots before him, Fin finds himself, however reluctantly, enmeshed in the lives of his neighbors. A close call with an SUV introduces Fin to Olivia, a forty-year-old artist struggling with the recent death of her young son and the subsequent breakup of her marriage …