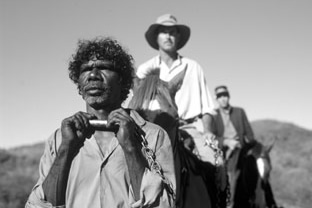 There are four of them making their way through the wild country, tracking relentlessly. It is 1922. In charge is the Fanatic, cold, ruthless, calculating but complex. The second of the three whites is the Follower, a greenhorn, new to the outback. And there is the Veteran, a thinker rather than a doer. But the real leader, whether the others know it or not, is the Tracker himself, a mysterious figure who clearly isn’t who he seems.

They are half a day behind the Fugitive, a black man accused of murder. Tension rises; the whites sense a hostile black behind every tree. They surprise a small group of bush blacks, and the subsequent interrogation session turns into a small massacre. From that point the expedition falls into increasing disarray. The pack horse is speared, out of nowhere. The men begin to argue and suspicion falls on the Tracker, who is chained for his impertinence. When one morning the Follower wakes to find the horses gone, the Tracker unconscious and the Fanatic hanging from a tree by his own chains, he reckons he is a finished man. But he reckons without the Tracker.