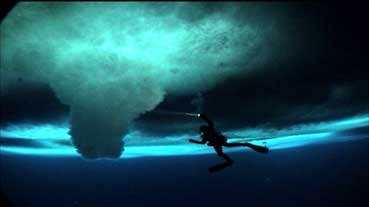 The film follows a hypothetical proposition: a group of astronauts are circling the earth in a spacecraft, but they cannot return, as our planet has become uninhabitable. The cause of this remains open – all-out war, outbreak of a new disease beyond control, radiation after the complete disappearance of the ozone layer, or whatever. The crew of the spacecraft has to find a more hospitable place out there in space, and releases a probe from their cargo bay, Galileo. But Galileo – after sending back very disquieting data – has to be sent on a suicide mission …

Without our knowledge we have had visitors from outer space for decades. They have come from a planet submerged in water, The Wild Blue Yonder, and their attempts to create a new community on earth have so far not met with great success. This film is narrated on-screen by one of the visitors, Brad Dourif. In words and lyrical images, he shows how our attempts to find a new home somewhere in space are doomed to failure. He explains how in the past when Earth was threatened with extinction, a manned space probe was sent to look for an alternative home in outer space. It did not succeed.