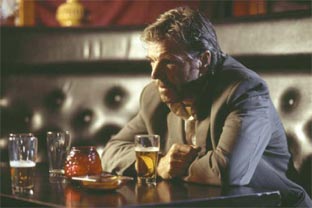 Wife Helen and kids Christopher and Gemma don’t notice anything wrong with Tom as they rush out the door in a flurry of farewells. But there is something wrong. A midlife dissatisfaction has blown out to become a deep, oppressive frustration that Tom cannot control. Mumblings in the garden lead to a humiliating day at work, which escalates into an alcohol-fuelled meltdown in front of his alarmed colleagues.

As his family waits for him to come home for dinner, Tom stumbles around a darkened city alone, and out of his mind. In the blink of an eye this ordinary man slips into the urban underclass. An act of kindness by Tom leads rent boy, Matt, to offer him a bed for the night. Matt sees a sugar daddy in Tom and whirls him into the life he leads – a risky mix of parties, petty theft and stimulants. The volatile friendship is doomed. When a better prospect comes along, Tom is abruptly dumped to fend for himself …