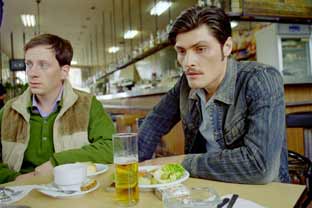 Two egocentric young men on the run – and on a quest. Meet Frank and Marc, naïve mama’s boy and driven devil, two oddballs with just about nothing in common, and it’s by mere chance they meet.

Marc assumes he’s killed someone and feels he has to escape. When Frank is out test-driving his mum’s camper and accidentally knocks down Marc’s motorbike, Marc simply nabs the van including the baffled driver and takes off. No matter where to, just across the border and onward. On the endless highways, Frank’s fear slowly gives way to curiosity. Marc begins to trust the weirdo and perhaps for the first time ever allows himself to become involved. And Frank starts to sense his sudden independence – and to enjoy it …