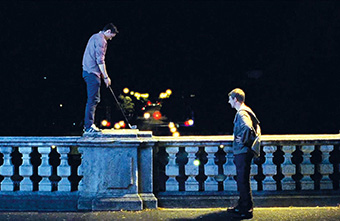 Hoping to gain social attention and fame, Leon, an internet video activist, and August, a dissatisfied and bored bank assistant, meet by chance. Together they shoot videos for Leon’s blog with which he tries to call attention to social deficits. As the number of clicks rises, their friendship deepens. In order to create something lasting in these flippant times, however, August decides to make their videos more extreme.

Soon the addiction to success and clicks displaces the ideals they once shared. Only when Leon realizes that August doesn’t stop at harming others does he decide to end their friendship. When the police recover a dead body from a lion’s compound, the question arises: How far would you go to attain immortality?