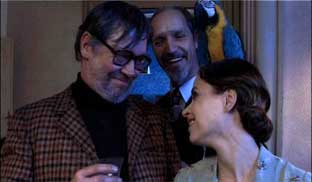 When we realize that our obsessions draw us deeper and deeper into the dark side of our personalities, then this knowledge is the remaining good we have to believe in to protect the world from ourselves. We have to conquer ourselves. When Vinzent enters the house to petition for the protection of animals, it’s strange that Berthe should invite him to her twin sister’s, Frieda’s, funeral, when he tries to explain the reason for his being there to the funeral guests and breaks the rules by drinking white wine, when he suddenly collapses and then wakes up undressed with Inge Stech in bed and is given red pills by Dr. Bernhardt it’s all the more disturbing that, while having a shower, he should discover his new girl friend, Rose, in the window opposite …