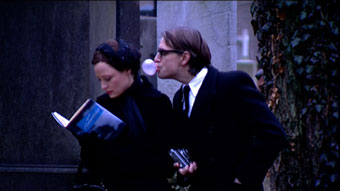 Wilma dreams of true love, just like in the movies. Wilma meets weird men. She has the choice between a musician with a strange moustache, a photographer with a wet mouth, and a man with droopy shoulders, whose main interest is in sailor’s knots. All three of them have their own peculiarities and very little to offer, but that is still better than nothing at all, particularly in times of forlorn hope.