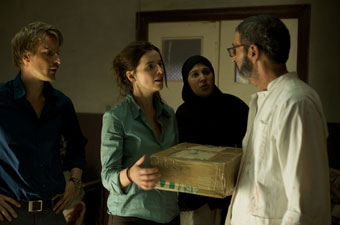 Iraq in the year 2004: The war has officially ended, but everyday life has been devastated. Fallujah has become a stronghold of Iraqi resistance. Food supplies are dwindling, and the only hospital no longer has even basic supplies.

In an attempt to relieve the tension, American and Iraqi forces agree to a 24-hour ceasefire. Young German journalist Oliver sees this as an opportunity to get a good story. He wants to join a first aid convoy to the hospital in Fallujah. However, they have to be back in Baghdad the next day. Kim is the head of Medica mundi, an international relief organization. She has already seen the misery in Fallujah with her own eyes. Alain Laroche is the other partner. He is one of the few remaining medical doctors in the combat zone.

The years of working under terrible conditions in the country have left him with a sharp insight into the troubles, but seem to have broken his will. Husam, their local chauffeur, has his own interests in driving to Fallujah. Crossing harsh war-torn territory with the threat of attacks ever present and caught between frontlines and their different ideals, their initiative is to help but suddenly they find themselves fighting for their lives.