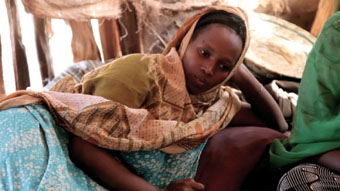 WAITING AREA is an uplifting film following four young women through the ups and downs of childbirth in Ethiopia. Casting its shadow over their stories is the disease of obstetric fistula, a widespread but preventable childbirth injury that leaves women in agonising pain and shunned by their communities.

Through intimate individual portraits, the film looks at motherhood through Ethiopian eyes. Idealistic Fatya is determined to overcome the many obstacles to educate herself and her son out of poverty, while Kediga suffered from fistula and is now determined to help prevent other women from going through the same ordeal. Misra is a young fistula victim from a poor village in urgent need of an operation, if only local care worker Abraham could make it happen. Finally there’s Meseret: a charismatic expectant mother whose delivery will provide the film’s dramatic climax.