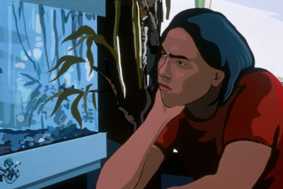 Transcending the boundaries of technology and imagination, the film is a breakthrough in film animation. Originally shot and edited as live action, the footage was then graphically “painted” frame by frame via computer by a team of more than thirty artists. The feeling created is that of an impressionist painting breathing with life.