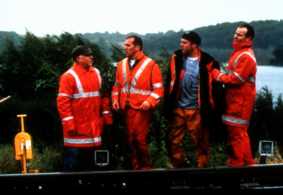 The film follows the fortunes of a group of rail track workers based at a South Yorkshire depot, as the privatisation of British Rail takes effect. When Harpic, the depot boss, gives Paul, Mick and the rest of the gang their new working brief, “performance related pay” and unpaid holidays seem like a joke. But before long, the choice is very clear to the gang: take their chances with redundancy cash and life as casual agency workers, or work for the new company under the new rules …